For those who can't take time to read, here's an excellent visual illustration of Fluoroquinolone Toxicity, by artist Billiam James.   Thank you, Bill!!! 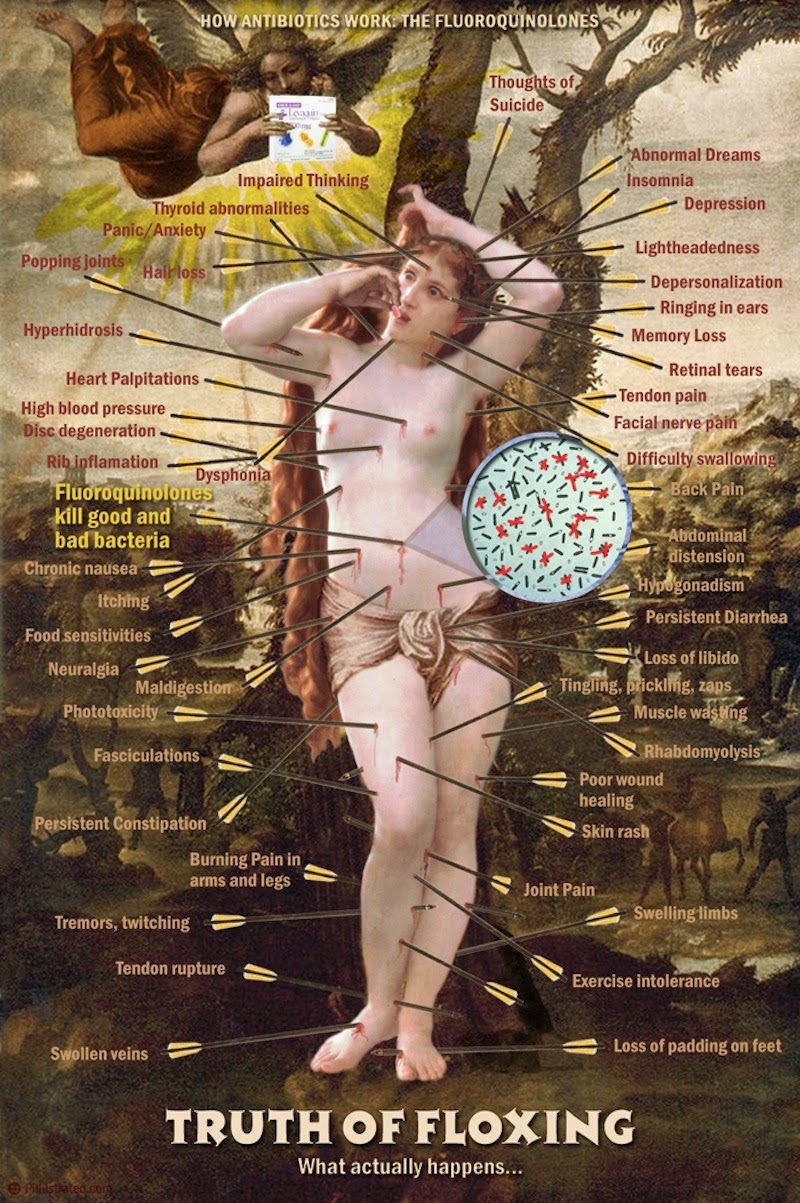 This is an introduction to Lisa, who has worked tirelessly to educate the public to the danger of fluoroquinolone antibiotics, after she suffered the devastating effects of being "Floxed".

This is what I have been battling for the past 9 months.
Please educate yourself to the danger.  Don't become a victim!

Fluoroquinolone Antibiotics – Still on the Market

Of the 30 quinolones that have made it to market since the 1980s, all but 6 have either been removed from the US market or have severely restricted use.
The fluoroquinolone antibiotics that are still on the market are some of the most commonly prescribed antibiotics. Per the FDA, “Approximately 23.1 million unique patients received a dispensed prescription for an oral fluoroquinolone product from outpatient retail pharmacies during 2011,” and “Within the hospital setting, there were approximately 3.8 million unique patients billed for an injectable fluoroquinolone product during 2011.”
When used properly, such as in cases of life-threatening hospital acquired pneumonia, fluroquinolone antibiotics can save lives.

It is difficult to describe the severity of these reactions. They are devastating. Many of the people in my study were healthy before their reactions. Some were high intensity athletes. Suddenly they were disabled, in terrible pain, unable to work, walk, or sleep

Dr. Cohen’s study of 45 subjects suffering from Fluoroquinolone Toxicity Syndrome, a name that I’m pushing for, (without an official name, it is difficult get the word out) showed that they had the following symptoms:
When a fluoroquinolone antibiotic triggers a toxic reaction in a person, multiple symptoms are often experienced.

Fluoroquinolones are eukaryotic DNA gyrase and topoisomerase inhibitors very similar to many antineoplastic agents (source).  What this means in plain English is that these drugs work the same way as chemotherapeutic drugs; they disrupt DNA and lead to destruction of cells.  A recent (2013) study conducted by a team of scientists at the Wyss Institute for Biologically Inspired Engineering at Harvard University Studies showed that Ciprofloxacin, along with a couple of other non-fluoroquinolone antibiotics, causes oxidative stress and mitochondrial malfunction. A 2011 study published in the Journal of Young Pharmacists found that, “There is significant and gradual elevation of lipid peroxide levels in patients on ciprofloxacin and levofloxacin.”  They also found that “There was substantial depletion in both SOD (superoxide dismutase, “a free radical scavenging enzyme”) and glutathione levels” and that “On the 5th day of treatment, plasma antioxidant status decreased by 77.6%, 50.5% (and) 7.56% for ciprofloxacin, levofloxacin and gatifloxacin respectively.” The study also notes that administration of fluoroquinolones leads to a marked increase in the formation of Reactive Oxygen Species (ROS) and that “reactive free radicals overwhelms the antioxidant defence, lipid peroxidation of the cell membrane occurs. This causes disturbances in cell integrity leading to cell damage/death.”

How Many People are at Risk?

I see fluoroquinolone toxicity everywhere, and even I think that those numbers are high for severe, disabling reactions like mine where multiple symptoms develop simultaneously.  Not everyone who has an adverse reaction to a fluoroquinolone has a reaction like mine, or even develops Fluoroquinolone Toxicity Syndrome. Many people have milder reactions.  Milder symptoms include any one of the symptoms listed above as well as  diarrhea, vomiting, mild tendinitis, decreased energy, painless muscle twitches, memory loss, urgency of urination, or any number of reactions that the body may have to a massive depletion of antioxidants and increases in lipid peroxide levels and reactive oxygen species production.
Even though severe adverse reactions to fluoroquinolones antibiotics can be painful and disabling for years, many (possibly most, but certainly not all) people recover from Fluoroquinolone Toxicity Syndrome with time.  I anticipate that I will be fully recovered 2 years after my reaction started. Sadly, there are some people who don’t recover.  They suffer from chronic pain, disability, impaired cognitive abilities, etc. permanently.
It is absurd, to say the least, that an acute problem, an infection, that can easily be taken care of with administration of an antibiotic that is not a fluoroquinolone, is converted into a chronic problem, a  syndrome that can disable a person for years, by a prescription ANTIBIOTIC, used as prescribed. In my case, a urinary tract infection that could have likely been taken care of with macrobid or even cranberry juice and d-mannos, was treated with Cipro which left me unable to do many physical and mental tasks that I had previously been able to do with ease. It’s a crazy, absurd situation.  It’s absurd and it’s wrong.

Some Antibiotics are More Dangerous than Others

The bottom line is that these popularly prescribed antibiotics are dangerous drugs that have caused thousands of people to suffer with a myriad of maladies. Undeniably, they have their place, in treating life-threatening infections.  Unfortunately, they are not being reserved for use in life-threatening situations and people are being hurt after taking them for simple sinus, urinary tract, bronchial and prostate infections. A strict and rigorous protocol needs to be established to limit the damage that they cause; because it’s not right to maim and disable people to treat their sinus infections.
Sources are highlighted throughout the article.

Printed with permission from Lisa Bloomquist.
Thank you, Lisa!